I think when it comes to riding a motorcycle, you either loved it or hated it.  If you have tried, you quickly learned to deal with an army of naysayers, bad drivers and road conditions, so best learn to love riding quickly. And in this hobby, there is no room for error. After all, “motorcycling is not, of itself, inherently dangerous. It is, however, extremely unforgiving of inattention, ignorance, incompetence, or stupidity.” 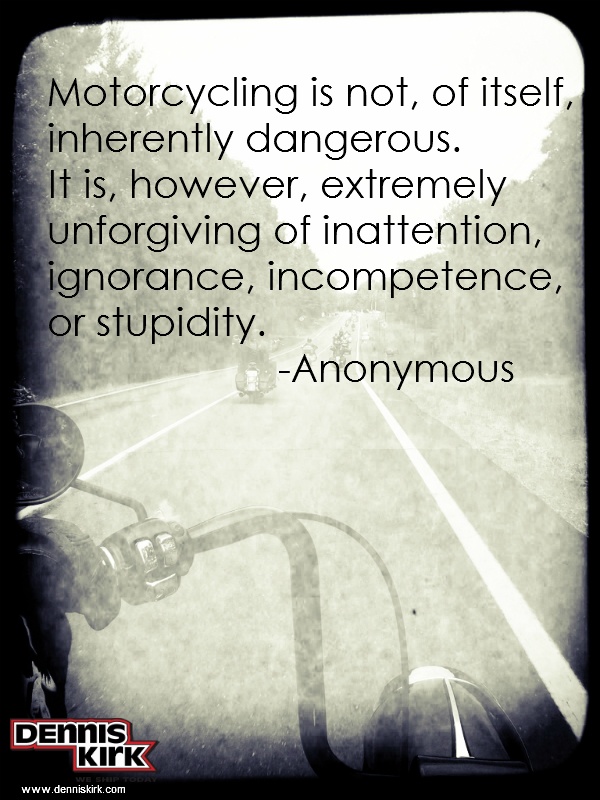 When I was 25, I got the bug to ride. It would be a lie to say that my father was not a large factor, but in the end it was my decision to start. Among many reasons, I heard a quote that inspired me; and while I don’t quite remember that quote word for word, it went something like this: “Am I afraid of dying on a motorcycle, well, in the end, I am more afraid of not truly living.”

I can attest to this. When I ride, few issues in my personal life cannot be solved from just a few moments on my bike. You see, if you don’t ride, how could you ever understand? You don’t know what the smells, the temperature of the air, the humidity, elevation, wind, and different road conditions feels like. Of seeing, and tasting, and smelling, and believing you are in the picture, not looking at it. Its an assault on your senses. A wonderful assault at that.

Riding a motorcycle is arguably the most conscious activity one can do. But, this wonderfulness I just described was not the case in the beginning. For lack of saying this better, I was scared shitless when learning. When I first took a riders course at Bumbus Harley in Murfreesboro, I came home with knots in my shoulders like you can’t believe. And I didn’t even get out of second gear.

My first real ride out was actually the day I had my first accident. But, you could say I was learning the ropes in a controlled environment- a church parking lot. I confused the break and clutch, and dropped my Honda Shadow 750 into the parking lot at around 10 miles an hour. After sliding for a good 12 feet, I got up and rode my ass home. Never to repeat that mistake again. Since then I have ridden over 25,000 miles. I have seen Texas, Arkansas, Kentucky, North Carolina, Tennessee, Mexico, and I am just getting started. Since I started, I have bought and sold 5 bikes, and I currently own 2. I also got into different styles of riding, different classes of bikes. I started on the Honda Shadow 750, in the cruiser class. I quickly outgrew that, it lacked power, soul and weight. Nothing worse than highway riding with low power and low weight. You know when you pass an 18 wheeler in a car at 80, think about that on a bike.

I quickly searched and found a solid Ducati ST4, in the sport touring category. I loved that bike, and it will always hold a place in my heart. There is a reason Ducati is world famous.

After the Ducati, I decided to sell the Honda Shadow and buy a Lava Red 2000 Yamaha R1. This bike was my first true understand of speed. Of just how fast a superbike can be. While the Ducati ST4 was very fast, the Yamaha R1 was in another class, the superbike class. 0 to 140 would happen in a matter of heartbeats, and the torque above 9,000 rpm’s was enough to scare even the boldest of souls.

After the Yamaha, I got the itch again to tour. My father loved to ride on long all day trips. So you need a bike that won’t completely exhaust your body and mind. So I bought a 2008 Honda VTX 1800, and sold the Yamaha R1. The first week I owned the VTX 1800, I took it all the way to Texas and back. Over 3,000 miles and wow what a great trip. The bike was a dream, and I have gone on to ride around the entire state of TN.

About 4 months after getting the VTX 1800, I was missing my Yamaha R1. I missed the performance, and the styling. Nothing quite feels like going mach 1 on a beautiful day. So I started looking at bikes again. I am on Craigslist weekly, looking at who and what motorcycles are being sold. Then I found my dream bike, the Ducati 1098s Dark.

You see, last year I almost bought one for at Pandora Motorsports in Chattanooga, TN. I got so very close, ran the numbers and the insurance! But in the end, I bought the R1 and didn’t regret that for a moment. But, the time had arrived in 2014 for the Dark Knight to arrive in my garage. Hunter Thompon once said, “Faster, Faster, Faster, until the thrill of speed, overcomes the fear of death.” While its not something to be taken lightly, it sure can be one hell of a thrill.   Now I am off to more adventures, both touring and exploring the depths of mind bending performance. I hope you got something out of this blog. I hope you too find the courage to go out there and give riding a shot. After all, “You only live once, but If you do it right, once is enough.” Adam Faragalli